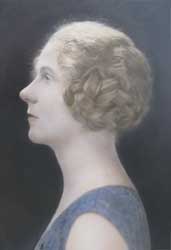 Before Helena Rubinstein left England for America in 1914, she made Rosa Bird responsible for the running of her London Salon in Grafton Street. Rosa was a tall, elegant and totally loyal employee and for the next 14 years she and Helena would correspond with each other three or four times a week. Helena would instruct Rosa on how to run the London business, what to spend on advertising, how much to pay for merchandise and not to waste any money. Rosa would reply with the latest news from the London social scene, who the new clients were and how expensive everything was.

Over the years they became very close friends, but it was not to last. Helena became more demanding over money and finally, when Rosa was told to sign a divorce affidavit that Titus had not contributed to the company's success, Rosa left and set up her own beauty salon.

Helena never referred to Rosa again, even in her autobiography.