Helena and her two sons Roy and Horace 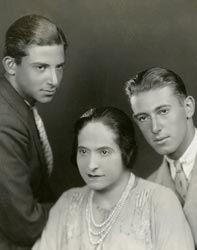 Soon after arriving in England in 1909 her first son, Roy, was born. Three years later Horace arrived. Owing to the ever increasing pressure on Helena as her business empire and travel commitments expanded, the boys saw little of their mother. They were looked after by a series of nannies and sent off to various boarding schools. Not surprisingly, difficulties were to arise in later life.

Roy, who from an early age sought approval and affection from his mother that was not forthcoming, devoted his life to the family business. He was academically bright but his personal life was thwarted by a string of unhappy marriages. On the other hand Horace was Helena's favorite; creative, impetuous and careless with money, he was to die of a heart attack after crashing his car at the early age of 46.

It devastated his mother.